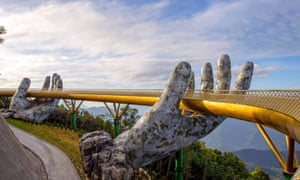 Agolden bridge held up by two enormous stone-coloured hands has opened in the Ba Na hills, near Da Nang in central Vietnam. It is the latest in a series of statement footbridges around the world.

Cau Vang (meaning gold bridge) opened in June, is 150 metres long and 1,400 metres above sea level, with views across the green mountainscape. It took just under a year to construct, with initial designs by TA Landscape Architecture. 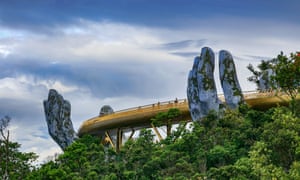 The Ba Na hills mountain retreat was a favourite holiday location for the ruling French authorities in the early 20th century but fell into ruin after the revolution against colonial rule in 1945. The area is now home to a replica French village and gardens, along with a 5.8km cable car track – once the world’s longest and highest – as well as a cavernous concrete amusement complex, hidden beneath the kitsch-looking village. Remnants of the original villas have been spotted by travellers riding the cable car.

Cau Vang follows in a line of unusual footbridges, seen everywhere from Iowa to India: structures that are noteworthy as architectural statements in themselves, rather than accessories for an already popular location.

In 2014, the Fan Bridge was unveiled in Paddington Basin in London. It currently only operates Wednesdays and Fridays at noon and Saturdays at 2pm, leaving it somewhere between the practical and the artistic. The hydraulic structure, designed by Knight Architects, positions its five steel beams 20 metres across the water, rising in a similar way to a traditional Japanese fan. 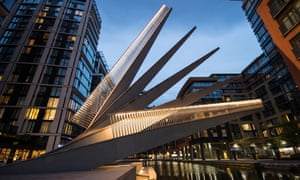 The nearby Rolling Bridge (operating Wednesdays and Fridays at noon and 4pm) unfolds its octagonal structure on one side of the canal towpath to form a walkway 12 metres across the water. It was created by Heatherwick Studio and installed in 2004 as a “sculptural object”.

A 185-metre loop of three interconnected red footbridges form Lucky Knot bridge in Changsha, China, which opened in 2006. Designers Next Architects, were inspired by Chinese knotting folk art and the infinite structure of the Möbius strip. 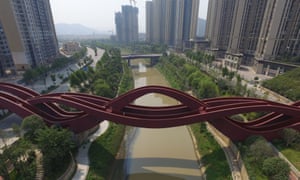 At the opposite end of the technology scale are the sustainable footbridges made by the Khasi people from living, natural resources in the gorges of Meghalaya, north-west India. The living root bridges are deep in the tropical forest, close to village of Mawsynram, the wettest place on earth. The most famous, the Umshiang Double Decker Living Root Bridge, took 15 years to craft into its current form. The practice itself is thought to be 180 years old, with the bridges built from rubber tree roots nurtured for years to hold human weight. This material is a preferable alternative to wood here, which decays during the monsoon season.

Parting the sea might sound like an impossible act but how about building a permanent pathway through water? The Moses Bridge in the village of Halsteren, in North Brabant, Netherlands, acts like a dam under the waterline, holding the moat on either side. The “sunken” bridge, crafted from pre-treated, rot-resistant wood, was designed by Ro & Ad Architects to provide access to a 17th-century Dutch fort. 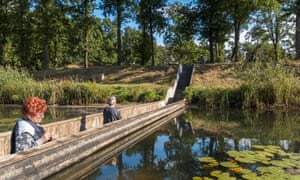 Decades of lovers have transformed a once relatively unremarkable-looking bridge in Serbia, now known as Most Ljubavi – one of the earliest versions of a love bridge. Legend has it that Nada, a teacher, would meet her army officer lover Relja on the bridge to pledge their love – but he left her during the first world war and she subsequently died of a broken heart. It is thought to have become famous thanks to a poem, Prayer for Love, written by Desanka Maksimović in the 1990s. Couples now visit the “Bridge of Love” to attach inscribed padlocks to it. The practice for good luck in love now takes place on bridges around the world.

The modern, tubular Webb Bridge connects in Melbourne’s South Wharf with the Docklands area, and was designed by sculptor Robert Owen and engineered in 2003 by Arup – the company behind the Sydney Opera House. Also by Arup, the Helix Bridge in Singapore is a spiralling 300-metre DNA-inspired design from Cox architecture, which completed the Marina Bay walkway in 2010. 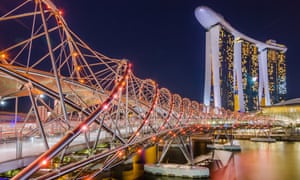 Best visited after dark to see its glowworm appearance, Henderson Waves, undulates through Singapore, connecting Mount Faber Park to Telok Blangah Hill Park. The 274-metre snake-like structure is made up of Balau wood and curved steel “ribs” which form shelters in its upward curves.

Another delight for dusk, is the High Trestle Trail Bridge in Iowa, which runs half a mile over the Des Moines River Valley. As part of a “rails to trails” project, it helps connect the 25-mile trail from Woodward to Ankeny. The illuminated steel beams represent a view through a mine shaft, reflecting the coal mining history of the local area.